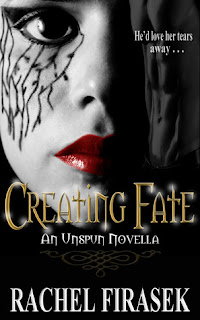 From Goodreads:
She gave away her heart…
Giving her heart to a mortal wasn't something the First Fate planned. Losing him nearly shattered her soul. Upon his death, Clotho swore never to love—or weave life—again. Hoping she'll change her mind before it's too late, Zeus commands the spinner of life to take a much needed vacation from her immortal responsibilities.

He had to hide his...
Dane is close to cracking the drug ring he's spent the last two years infiltrating, but needs to perform one last heist to meet the head man and prevent an impending war. An undercover agent, he's now on the run from drug lords, thieves and with the very woman whose tears make him forget his purpose.

Together they'll find a way back from the dark.
Chloe will have to put her trust in the man she believes may have killed her fiance, or face an eternity on Earth. Without the desire for life, hope could slip through the cracks of time if he doesn't love away her sorrow.

My Review:
This was a fantastic novella! I enjoyed it a lot, it was great and interesting, and it is a novella, so it's shorter then a full length novel, the way it was written, that works. If things were expanded, and sub-plots were added, it could be a full length novel, but that's an if that didn't come. Oh, well!

I've read a few books about the Greek Fates. Mostly they're side characters, and yeah, I think this is the first time that at least one of them (and I think one per book) is the start of the story. So yeah, that was really great to read about, really original and awesome!

Great how it ended, because yeah, that's what they wanted, they were happy together, and yeah, just a great ending that makes me want to know what's going to happen next in this world, because I know it'll be entertaining!

This was a great book, I'm glad I was able to read it, and I hope to read the others!