Week 25 Review: You Are My Only 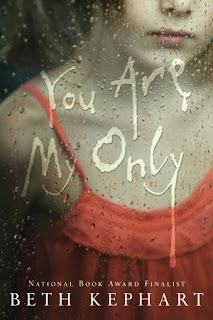 From Goodreads:
Emmy Rane is married at nineteen, a mother by twenty. Trapped in a life with a husband she no longer loves, Baby is her only joy. Then one sunny day in September, Emmy takes a few fateful steps away from her baby and returns to find her missing. All that is left behind is a yellow sock.

Fourteen years later, Sophie, a homeschooled, reclusive teenage girl is forced to move frequently and abruptly from place to place, perpetually running from what her mother calls the "No Good." One afternoon, Sophie breaks the rules, ventures out, and meets Joey and his two aunts. It is this loving family that gives Sophie the courage to look into her past. What she discovers changes her world forever. . . .

The riveting stories of Emmy and Sophie—alternating narratives of loss, imprisonment, and freedom regained—escalate with breathless suspense toward an unforgettable climax.

My Review:
This was such a great, creepy, awesome book! I enjoyed it so much! It was a bit confusing with the way the characters saw the world, and I saw another review that mentioned something that I picked up on as well-that while Sophie's story took place in 2004, but it felt like it took place a decade earlier!

I enjoyed the back and forth narration, because both Emmy and Sophie have things going on in their lives, and while the thought that Sophie is Baby, well, that isn't dealt with till later in the book, but thinking it was true, and watching both of their lives, was really great!

The differences between them were pretty big. Emmy goes through life, having dealt with a husband she didn't care about, being blamed for the loss of her baby, and then the downward spiral. Sophie has been isolated her whole life, running from "no good" people. But then there's Joey and his aunts.

I enjoyed this book a lot, it was confusing, but really good!