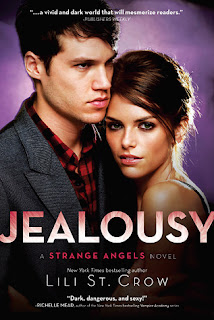 From Goodreads:
Dru Anderson might finally be safe. She's at the largest Schola on the continent, and beginning to learn what it means to be svetocha—half vampire, half human, and all deadly. If she survives her training, she will be able to take her place in the Order, holding back the vampires and protecting the oblivious normal people.

But a web of lies and betrayals is still closing around her, just when she thinks she can relax a little. Her mentor Christophe is missing, her almost-boyfriend is acting weird, and the bodyguards she's been assigned seem to know much more than they should. And then there's the vampire attacks, the strange nightly visits, and the looks everyone keeps giving her. As if she should know something.

Or as if she's in danger.

Someone high up in the Order is a traitor. They want Dru dead—but first, they want to know what she remembers of the night her mother died. Dru doesn't want to remember, but it looks like she might have to—especially since once Christophe returns, he’ll be on trial for his life, and the only person who can save him is Dru.

The problem is, once she remembers everything, she may not want to...

My Review:
Such a fantastic book! It's pretty different already from Strange Angels, because Dru knows more, but also because she's changed, already in just the two previous books, and then more in this one, too! It was great to read about!

So while we found out that Dru was a svetocha, in the last book, but in this one, we learned more about what that means, and yeah, why there are so few of them, and it's pretty grim! But Dru's different from all of them in personality, I'd bet, because she's a fighter, and she fights pretty hard!

I kinda had a few suspicions in this book, or from the previous one, and a few of them were confirmed, which was fantastic! I like being right, I think most people do for things that when they're right, is good (or a book, in which the writer is in control, not us readers!)

The characters were just so awesome in this book! Of course Dru, doing what she does in this book, Graves, the almost boyfriend werewolf, the vampire Christophe, who has some connection to her mom, and yeah, all the others! They were really great!

Loved that ending, so good, and now I just want more! And I'll have more, at least 2 books!