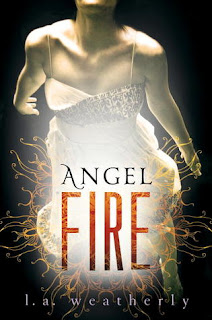 From Goodreads:
In Book Two of L. A. Weatherly's wildly romantic, action-packed trilogy, the angels are back with a vengeance . . . and they don’t have heaven in mind.

In the wake of the Second Wave, the angel menace has exploded, and Alex and Willow are on the lam. Willow's prophetic dream points them to Mexico City, where they connect with a fledgling group of angel killers led by the exotically beautiful Kara, an Angel Killer from Alex's past. But the team remains suspicious of Willow, even after the more-experienced Alex takes over as leader, training them hard for a rush attack on the Seraphic Council, or "The Twelve." This elite group of all-powerful angels is also under the scrutiny of Willow’s angel-father, Raziel, who has his own sinister plan to defeat them.

What Willow hasn't told Alex is that there was also a mysterious boy in her dream, one she felt overpoweringly attracted to. When brooding, gorgeous Seb shows up in the flesh, he turns out to be another—possibly the world's only other—half angel. He's been searching for Willow all his life, and when Alex enlists this rival to help keep Willow safe, he can't predict what chemistry will pass between them . . . or how far Willow might go to keep Alex safe. Will their love endure or spell doomsday for the human race?

My Review:
Oh, such a great book! It has been a while since I read the first book, but yeah, I just jumped right into this book, and things were happening quickly! It was just so good to read! And that it's the middle book, well it didn't have that slump that seems to be a cliché, but that I've never come across!

So the stakes are rising, since there's more angels, and travelling to Mexico, that shakes things up a bit. That they have a group of people to surround and protect them, well, that's pretty great, it's helpful because there's a big battle coming!

It sucked that they fought, and most of the reason was because of Seb, the maybe only other half angel. So of course there's a connection there. But there's also a connection to Alex, who was with her when she went through the events of the last book!

Oh, that ending! That was pretty explosive! And it's a pretty big change to the world! I can't wait for it all to play out, it's going to be so entertaining and a bit hard for the characters to fight and maybe fix, and I can't wait for that!

This was a really great book, and I can't wait for more!