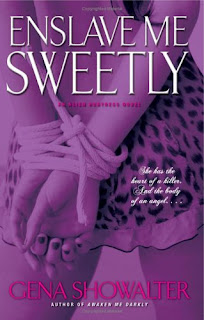 From Goodreads:
Eden Black walks among humans, protecting them from the murderous evil of other-worlders who abduct and enslave. And though she appears to be human herself, Eden is an alien, a Raka, distinguished by her golden hair and skin, and gifted with the ominous ability to kill without remorse -- and with total accuracy. That is, until the fateful night she has one shot to eliminate her target, a human slaver -- and misses.

My Review:
Oh, this was a highly enjoyable book, very quick read, and funny, loved all the characters, and the plot was amazing as the mystery progressed quickly, from discovering how the aliens were getting from their planets to ours, and back again! Plus Eden was just an awesome character!

Eden is an assassin, and she wants to be one of the boys, which is way different from her "Daddy's Princess" role from a young child to a young adult before she became a assassin. And that change, it shows how strong she was, because her race, Rakian, are peaceful, and not really into violence, they're lovers more then fighters, but she uses that love, passion, and puts in into her fighting, and so people constantly underestimate her!

That one scene with the bet, and the lady that had been helping out the bad guys, well, that was hilarious, and how Lucias tried to get her to talk, and once the 10 minutes were up, Eden got to her very quickly, that showed him! So funny! Another funny thing was when they told each other names, her middle name, and his real full name, so freaking hilarious! I mean, what are your guesses for Eden F. Black? What does the "f" stand for? Hilarious!!

And then her dealings with Devyn, those were really funny, how he keeps trying to seduce her, and she puts him off because of Lucias, that was sweet, and funny, in how many times he tried to go around it, because he was kinda egotistical, and yeah, that was great!

This was an excellent book, totally a Gena Showalter book, and a another reason why I love her writing! Just check out this series/her writing if you haven't, because it's the best!