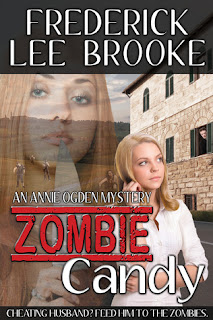 From Goodreads:
You know early on, from the color of the inappropriate bra in the opening scenes, that Zombie Candy is going to be a black comedy. Most people could sympathize with an obsession for sex and zombie movies, but who would put up with a husband who doused every dish with cilantro?

Frederick Lee Brooke serves up another literary treat with this bizarre and comical tale of love and betrayal. Candace Roach enlists her best friend Annie Ogden (our favorite sleuth from Doing Max Vinyl) to find out what her husband is up to – but their home-cooked aversion therapy gets out of hand and hurtles along an astonishing highway of the undead.

My Review:
So this is an awesome book, simply from the characters, and the unique ways they go about things, like Candace, and her husband's cheating, to Annie and her partner on ways to get evidence about said husband's  cheating, and the way that they teach him a lesson, it was very elaborate, and inventive, and tailor fit to Larry, what with his love of zombie movies!

The beginning was a bit strange to get into, kinda vague, like I was seeing it through a gauzy veil, what with the discovery of the cheating, and the start of the dealing with said cheating, and some incidents like taking out her old motorcycle, a gun, and a car, and how bits and pieces came together, into a pretty hilarious book at the end! The short chapters of the past, those added to the beginning and middle, and I think they're part of the reason why the ending happened the way that it did.

The whole "teach him a lesson" part of the book was my favourite, with blood, guts, explosions, and a bit of deserved revenge with the bonus of being in Italy, in such lovely yet seldom used scenery, I've maybe read 2 books now with Italy, so yeah, it's something new and fresh, and I love exotic locations on novels, which is just the best!

This was a really great book, and the zombies were the best, and the ending was good, though a bit abrupt, I'd have though there might've been a confrontation between Candace and Larry, beyond what happened, but nope, and that was just fine, and yeah, it was a really good book, so I hope you guys check out all the giveaways that this tour has here! 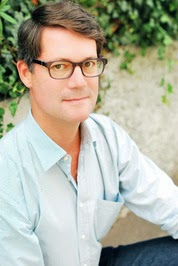 Bio:
Frederick Lee Brooke launched the Annie Ogden Mystery Series in 2011 with Doing Max Vinyl and following with Zombie Candy in 2012, a book that is neither about zombies nor sweets. The third mystery in the series, Collateral Damage, appeared in 2013. The first book in Fred’s entirely new series, the Drone Wars, is called Saving Raine and appeared in December 2013.

A resident of Switzerland for the last 20 years, Fred has worked as a teacher, language school manager and school owner. He has three boys and two cats and recently had to learn how to operate both washing machine and dryer.

When not writing or doing the washing, Fred can be found walking along the banks of the Rhine River, sitting in a local cafe, or visiting all the local pubs in search of his lost umbrella.